A bit more on the journey of the Amazing “L’s” – rock stars Lyric and Liam as they settle into Stanley Prison.

Yesterday, Barb Chelgren and Ciara Nervick once again proved how selfless the Can Do Canines Great Start puppy raisers are. On treacherous roads, they made their way to Can Do Canines in New Hope,  Barb with Liam and Ciara with Lyric. It was the turn in day for the pups they had loved and trained and given their hearts to. The moment when the leash is handed over is one that I had always heard about but have never witnessed. After a few more pets and kisses, Barb and Ciara were off to continue on with their day with a little piece of their hearts left behind.

Liam and Lyric’s day was just beginning. Trainer Dyan Larson loaded them up for the 2 hour, 20-minute drive to Stanley Correctional Institution in Stanley, Wisconsin. Stanley is a medium security facility and the warden, Reed Richardson, is safe to say, a dog fanatic! He has a lab at home and when he was promoted to warden and assigned to Stanley, he insisted on making Stanley a dog prison. At the time, there was only one other prison in Wisconsin that trained dogs and he was going to leave no stone unturned to get one at his prison. He and his staff worked like crazy to find a partner to make it happen. Can Do Canines was just far enough away that it didn’t make sense for them to place dogs in Stanley. That’s when Dyan Larson changed everything.  She is an amazing trainer who lives in Eau Claire who agreed to be the program trainer. That meant Can Do didn’t have to travel their staff to Stanley and the program was launched.

To say the warden and staff at Stanley are thrilled to have a puppy program is a vast understatement.  The warden talks about all the positive changes that have resulted from having dogs, even with the inmates who aren’t part of the dog program. Just seeing a dog walk by makes all the difference in the world. And it’s all thanks to the perseverance to a lab loving warden. 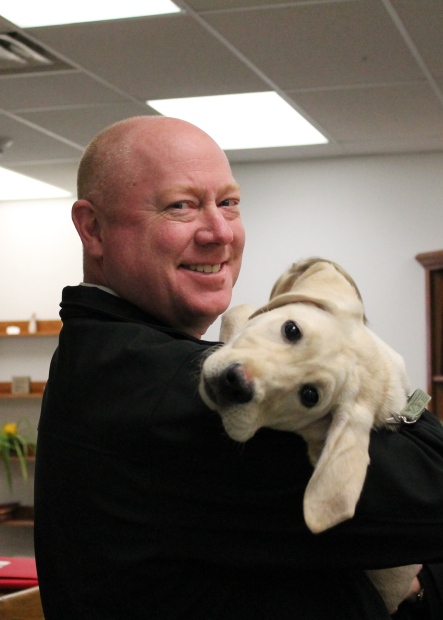 The Warden getting to know the new pups on the block!

So, no surprise yesterday that when Dyan arrived, the warden was in the parking lot to greet her and the newest members of the Stanley gang, Liam and Lyric. Since they’re brothers, and brothers tend to chew on each other, Dyan suggested to Warden Richardson that he take Lyric and she would take Liam. After walking across the parking lot towards the front door, and of course, a pee break by the flag pole, the two walked into the lobby only to be greeted by 8-10 staff members who couldn’t wait to see them. They had all heard for two months that they were going to get two of the “L’s” and the excitement of everyone finally seeing them was just joyful to watch. After all the initial hellos, everyone went back into the administration area where they closed the door to the lobby and let Liam and Lyric off leash. The puppies went wild running around the room, getting tons of pets and kisses and, of course, Liam and Lyric got each other’s ears a few times.  As the staff looked on with huge smiles, Warden Richardson taught Lyric to speak in about 3 minutes. I’m sure Dyan wasn’t that impressed having just listened to Liam and Lyric speaking non-stop for 2 ½ hours from Minneapolis!

Warden then hooked up Lyric’s leash and headed back into his office to show Lyric where the treats are kept!

Then, it was time. After going through security to enter the prison, the puppies were then walked outside through two more huge gates, past the razor wire and into the visitors building. After going through Control, which monitors the movements of everyone in the prison and opens and closes doors, the puppies walked confidently into the visitors area where four carefully chosen inmates were anxiously awaiting their arrival. 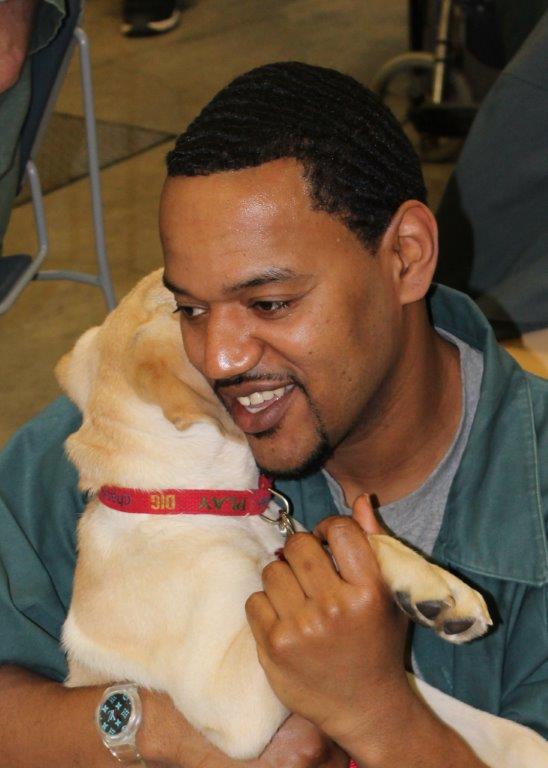 Lyric soaking up the love and hugs!

Two inmates are assigned to each puppy. The inmates share a cell and the puppy crate easily takes up 40% of the floor space in the cell. It’s extremely tight but no one complains a bit because they have a puppy. There are approximately 40 inmates in the dog unit. They are all in the same housing unit and all go to training classes even if they don’t currently have a dog assigned to them. Ahead of Liam and Lyric coming in, there were 12 dogs in the unit so that means only 24 of the inmates have dogs. The rest all share in the joy of being around the dogs and help with the training during the classes. However, there’s nothing like having your own dog and that’s what the four inmates in the visitor’s room had been waiting for months.

Ronald and Vernon were assigned to Lyric. DeJay and Marc were assigned to Liam but whose dog was whose didn’t matter when Liam and Lyric walked through the door. Within seconds, the four inmates were on the floor savoring all the puppy kisses and hugging and loving the pups up like they had known them forever. Just to see the joy on the faces of the four was overwhelming. It didn’t take a minute for Marc to end up on his back with a puppy crawling all over his chest.

After 10 minutes of intense puppy loving, they took them outside for another potty break and then onto the unit. The dog unit is building 5, the closest to the front gate. It’s also the most visible to the guard tower and has several fenced in areas that the inmates and dogs can play off leash and potty. Each dog has his own assigned potty area so they can make sure to track any issues a dog might have. At night, when the inmates are locked in their cells, if a dog has to go busy, the inmate rings a buzzer and staff lets the inmate and dog out of the cell, down the cellblock and out to the potty yard. After they are done, they’re locked back in their cells.

The unit has two stories of cells that are in a big U shape. The common area in the middle is known as the day room. That’s where inmates spend a lot of their time before and after work. They eat all their meals there and socialize with each other. It was into this room that Liam and Lyric and their new puppy raisers walked, or should I say floated, into. Immediately, all the inmates gathered around the new stars of the dog unit. Of course, so did the 12 dogs and it was mayhem.  It was an incredible scene. Most of the inmates with dogs spend a great part of their time in the dayroom on the concrete floor just being with their beautiful pups.

After all the greetings had tapered off, it was time for an early dinner for the inmates because Dyan’s training class started at 4:30. Liam and Lyric were put into their crates in their cells for the first time and they were not happy. As Lindsay Merkel so perfectly put it, they sang songs of their people serenading the inmates with a little dinner music. But, that didn’t last long because it was out the door and to the huge gym where training happens.

Even though most of the dog unit inmates had just met Liam and Lyric, Dyan introduced their arrival at the class to a great round of applause and hoots by the whole unit.

Earlier, Dyan told the four handlers to make sure they didn’t compare Liam and Lyric’s abilities to those of the other dogs in the unit who are somewhat older. She emphasized that the new pups should have at least a week to get settled into their new surroundings and told them to keep working on the skills they already have learned from their Great Start homes but to not push them yet.  So, during the class, Liam and Lyric mostly watched the other dogs go through the paces and enjoyed all the pets and attention from the inmates who don’t currently have dogs assigned.

I told Marc and DeJay the story of how Liam got his name. He was Holly’s favorite from day one and when Holly got to assign names to the puppies, she knew in an instant that her favorite was going to be named Liam because that’s her grandson’s name. I told them that Liam had been Mr. Orange and that Lyric had been Mr. Red. Warden Richardson heard the story and looked at their leashes and said the dogs needed to trade leases because by happenstance, Mr. Orange (Liam) had a red leash on and Mr. Red (Lyric) had an orange leash on . So now both pups are flying their original colors as they begin their new chapter in their lives to being assistance dogs.

After the class, it was time to go out to potty again on the way to Unit 5. By this time, Liam and Lyric were EXHAUSTED. I don’t know how they could even move. They all stayed in the dayroom when we called it a night around 7. I think they were going to be falling fast asleep in no time.

I’ll visit again in two weeks to see how they’re coming along. Their days will be filled with more of the same. Lots of quality time with the handlers and tons of training. The puppies will go with the inmates to their jobs in the prison just as the puppies go with their puppy raiser families to work. Evenings are spent with the dog unit inmates comparing notes on training and showing off what they’ve done with their dogs.

Just as puppy raisers and Great Start homes have a need to hear about what happens in prison with their pups, the inmates have an insatiable need to hear what happens to the dogs when they are teamed up with their clients. There is a big bulletin board hanging in the dog unit dayroom that has Alisha Schrock’s letter of thanks to Can Do for her dog Maverick. They have all the issues of the newsletter with the client stories just to hear. They also, for several months, have had the photos Holly took of Sugar and the baby “L’s” hanging up there awaiting their arrival at Stanley.

I hope this gives everyone a little more info on what goes on. Thanks to Warden Richardson and his Admin assistant Lori for making this all happen! 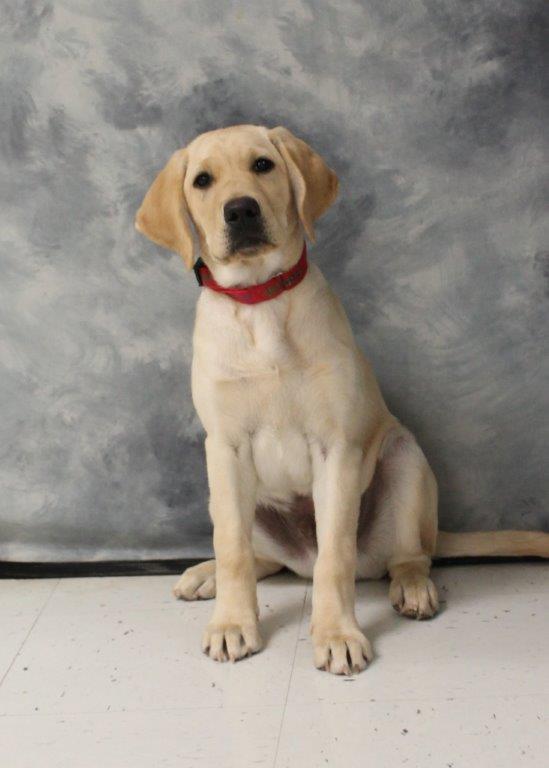 One thought on “Giving Back, Looking Forward-A First Hand Account of Lyric and Liam’s First Day at Stanley”