As I sit here during the pre-dawn hours, I watch with wonder at this moment in front of me.  Just 24 hours ago, we were at the Vet Hospital getting an earlier than planned assisted delivery of future assistance puppies.

But now, as I watch with only the light from the streetlights and the heating lamp, I am on the sidelines, watching this beautiful bond being formed between a mother dog and her puppies. I quietly sneak a peek into her private world-where humans aren’t part of the equation.  You would think that she was too tired, in too much pain from the surgery, or too concerned about herself to concentrate any of her limited energy on her litter of 7. But, what I witness is exactly opposite of that; I see Sugar-who with every litter has given it her all in ways I would have never guessed would happen in the canine world! You see her watching the puppies as if she were studying them to get to know them; at the first sound coming from them she immediately reacts to see what the issue is and she offers the only thing she has to make them feel better -herself. And tonight is no different because she searches for them even if she is out of the box for a couple of minutes-wanting me to bring her food into the whelping room area where she will be close to the puppies.  She chooses to only leave the room to go outside to the bathroom, preferring a 4X5 whelping box in the office in our house instead of the freedom of our entire house where she could relax! Now that the babies are here, she knows where HOME for her is! 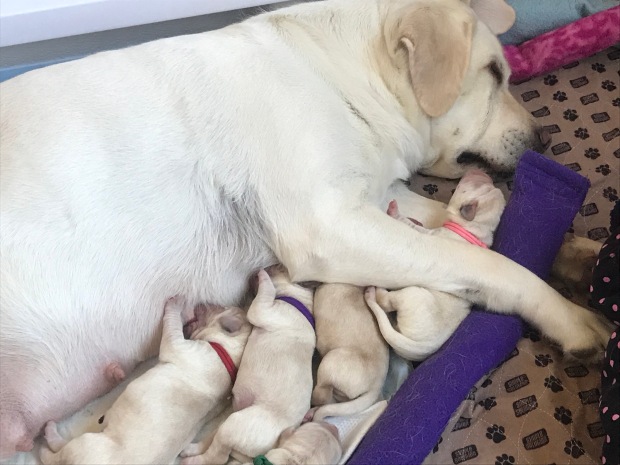 Nothing better than puppy kisses

And her mother’s senses which are laser sharp seem to gain clarity with each litter and each day, like when she finally decides to come out of the box to sleep right at the entrance but wakes up for no apparent reason, goes into the box and walks directly to ONE particular puppy who magically goes to the bathroom only seconds later- and she is right there to clean her baby up!  What is it that tells her which puppy would need her a few moments into the future? Is it a particular scent that gives her direct cues of what she needs to do with which puppy?:  She also hesitates and doesn’t step into the box; preferring to wait for us to come check on her when she gives a little whine so that we can move the puppies out of her way and she can get into the whelping box without incident! She also exhibits this behavior if she is going to get out of the box and puppies are on her.  Rather than jumping up and displacing the puppies she waits for them to be cleared from around her before making her exit.

The puppies found the sun!

I sit outside of the box with a sense of wonder at watching this critical bond with her puppies unfolding right before my eyes! I wonder what it must be like for her to wake up and all of a sudden have someone placing puppies on you.  I can only imagine her instinct is so strong that taking care of these babies just seems like another everyday experience that came her way!

Some of those questions got me to thinking about whether scent makes it possible for dogs to ‘smell” their relatives even years after they have been separated.  The studies seem to show that indeed they do!  See the article below for some of the backgrounds on studies done by Cornell University. 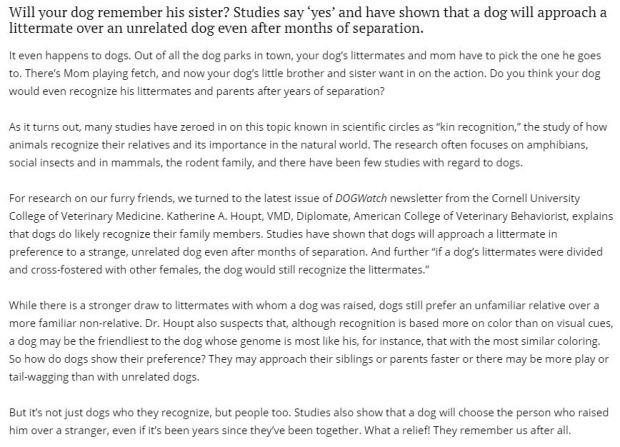 Sugar for sure is a natural at this motherhood thing, and the pictures below give you just a tiny glimpse of how evident that is when you watch her with her puppies, the “N” litter!

Miss Pink having some one-on-one time with her Mama 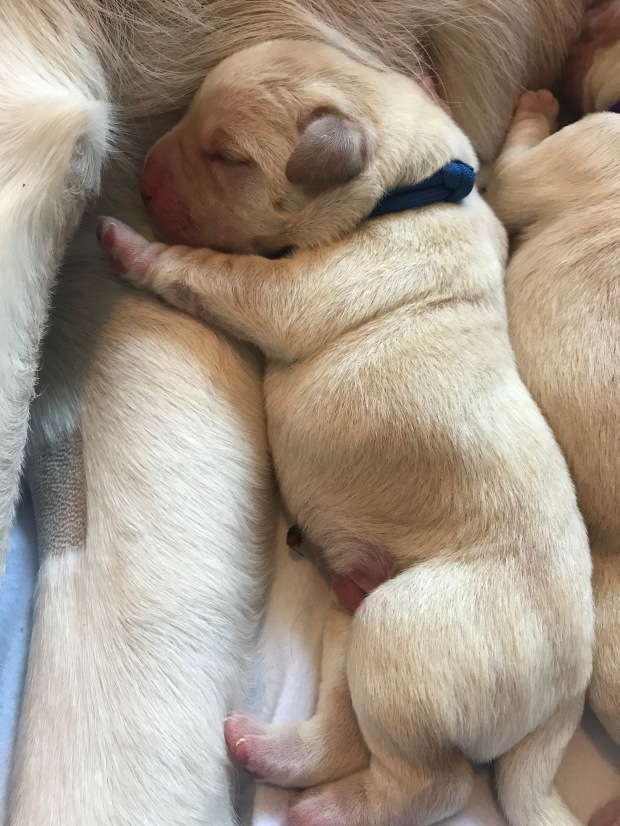 Mr. Blue showing he knows what he wants and how to get it!

Sugar and her puppies are enjoying a sunny afternoon catching up on some much-needed sleep after 2 night shifts! 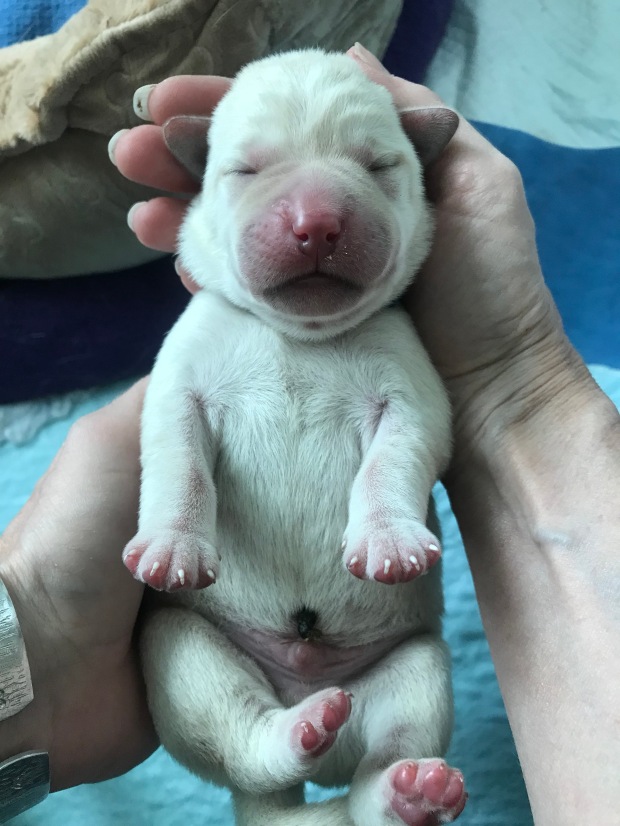