Last night was a long night-I thought we were doing alright with Sugar’s progress but around 8pm she had nothing major, but she lost her footing.  Then, about an hour later she did it again.

I was typing up the daily update for the breeding program coordinator so that I could email it to her and decided to add a side note at the bottom that read:

At around 11:30pm, my phone rang but I didn’t get to it quick enough.  Then I got a text saying “Call me please” from the breeding coordinator.  I knew something was up.

I called her back and she started asking questions about the falling.  What ended up coming out of the ensuing conversation is that she had been in contact with the vet on call after receiving my nightly update and they determined that there was enough cause for concern that it MIGHT be canine eclampsia that they wanted to immediately try some measures to reduce the risk if that indeed ended up being the case.  What I didn’t completely know at the time (but of course I researched after that) was that Canine Eclampsia can be deadly if not caught soon enough or treated. Although I have no vet or medical experience, the way I understood it is that Canine Eclampsia is different than the human form ; it is a low blood calcium that can cause neurological issues and can deteriorate somewhat quickly if signs and symptoms aren’t given your full attention. If caught early it is almost always curable, but the secret lies in catching the subtle clues that may not seem important-like Sugar stumbling, which isn’t typical for her but isn’t surprising with her being tired, having a c-section, etc.

Although I didn’t see the importance of that little tidbit of information, luckily there was something inside of me that made me decide to add it to the nightly update and that was an important piece of information for her to have. And luckily, part of this program is having a fabulous breeding coordinator who has a system of getting nightly updates so that she can stay on top of things that we have no understanding of!

Dora was wonderful at giving me the right amount of information to make sure that I could effectively get Sugar what she needed but yet made sure I stayed calm so that I could keep a close eye on Sugar. I had to be the eyes and ears to be able to notice if any other symptoms appeared that would require a change of plans and a trip to the vet ASAP.  I was told to give her the recommended amount of calcium supplements per the Vet’s instructions, watch her closely for any signs such as continued falls, tremors, seizures, pawing at the face, as well as a few others.

Being a whelping home, I always think I’m going to be mostly concerned with the health and welfare of the puppies; I had forgotten that things can get a little problematic for the mother as well. I absolutely ADORE Sugar and the thought that she wasn’t feeling up to par and could potentially have a life threatening situation required me to switch emotional gears quickly last night.

I spent the night awake, wondering what I could do to help Sugar; laying on my air mattress on the floor right next to the whelping box (under my office desk!)  while keeping my hand on her so that I could know if anything was happening like tremors or seizures. I had to fight the urge to sift through endless amounts of information on the internet because I knew that what I read would send me into a tailspin of fear for Sugar and I wouldn’t be able to keep a clear head and be the best caretaker of her if things got worse-and after that conversation close to midnight, sleep was NOT going to be my top priority! 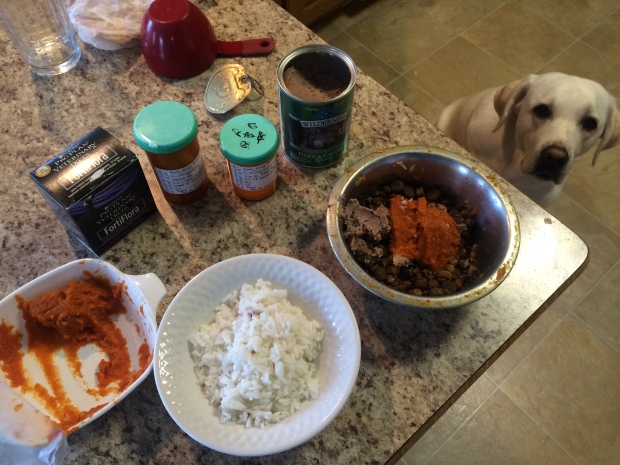 I joked with friends saying I should be on “Hell’s Kitchen-canine style” with all of the mixing of food items I’m doing for Sugar’s meals to try to regulate her system-pumpkin, rice,wet specialty food, 3 medications and soon to be adding cottage cheese!

Through it all Sugar has maintained her complete devotion to her litter of pups!

One thought on “Day 6-No Sleep for the Weary”