On July 2nd Sugar was officially retired from the Breeder Program and by July 23rd I wrote a blog saying Sugar would be starting her new journey towards becoming a Certified Therapy Dog.  After only 21 days in retirement, it had become obvious to both Sugar and I that she was meant to make people happy and although she was doing that, she was capable of much more!

Sugar has always loved riding along in the car, visiting a variety of restaurants, schools, memory care centers, and nursing homes-spreading her joyful personality wherever she went!  So, it seemed only natural to pursue therapy work as her next step.

So, we went back into training mode; slowly but surely I tried to remind her of all of the skills we had been working on for the last 3 years!  She had spent more time raising puppies and less time learning skills so things were rusty to be sure!  Her sits were sloppy, her “leave its” were almost non-existent and not interacting with other dogs seemed offensive to her-she wants every dog she encounters to be her best friend 🙂

We continued to train and I have to admit I had my doubts; we signed up for a testing evaluation months ago and finally today arrived.  I wasn’t sure she had learned everything she needed to pass the test and I had heard that the evaluator we had was a tough one-things would not be overlooked and you would only get one shot to prove your worth. I decided we would go into the testing with the thought that it would be a great starting point, and if we didn’t pass then we would know what was left to keep working on.

The testing site was 1 1/2 hours away.  I knew the ride itself would take Sugar off of her game as she typically likes to run around and smell everything after a long car ride.  I decided my best bet was to stop part way there and get her out at Cabela’s for a walk through the store where we could work on her distractions, being around kids, and general smells that she needed to ignore.  She wanted to greet everyone-fish, the animals in the display like the polar bear and raccoon, the kids running through the store and the other dogs.  I shrunk a bit in disappointment because her behavior wasn’t boding well for the possibility of a successful testing day.  My nerves started to increase and I got her back in the car to finish the long drive.

Sugar was trying to make friends with the fish she met…..she made people smile with her interest in the fish!

During the final part of my drive, my frustration was increasing.  I had worked hard trying to give Sugar all of the skills she would need for this test and I was disappointed at the thought that she might not show the evaluator what a great fit she would be for therapy dog work.  I resigned myself to the fact that the 3-hour round-trip drive may not get us any closer to my hopes.  As we were just about 2 miles from the testing location, out of the blue came a large adult bald eagle. It came from the driver’s side and flew next to my car for a good 5 seconds!  I’m not sure why, but it just felt like the bird gave me an immediate sense of peace about the situation and my nerves eased.  It was exactly what I needed at exactly the right moment!

We got there a bit early so I worked with Sugar outside of the facility to try to get her brain engaged.  She was not having any of it though!  As people came out from the first testing time I checked in with them to see how it went.  Two people were dismissed-their dogs had given a low growl when they saw a dog across the room and they were not allowed to participate any further.  The owners were devastated.

Finally, it was our group’s turn to go into the facility and take a shot at passing the exam! There are two phases to the test and 13 separate testing requirements. Some of the testing portions were similar to what we had trained as a service dog in training, and others were not.  In one, Sugar had to watch me leave the room for one minute, and when I came back in again she couldn’t rush to me-she had to remain calm and not advance.  Another one was what I call the food and toy gauntlet; In service dog class we may have had one or two items that were very tempting on the floor that we had to pass by; in this test the floor was FULL of temptations!  Squeaky toys, elk antlers, bones, balls…..and then the evaluator put down jelly beans on the floor and then a handful of skittles.  In the end, to add insult to injury, she opened a fresh bag of YUMMY salmon dog treats, placing them on the floor directly in the path of the dog.  Sugar decided that she WANTED whatever was in that delicious bag! That was our do or die moment! I just didn’t think she would be able to resist the temptation.  I didn’t realize it at that moment, but that wasn’t even the worst of it.  In addition to having to go through the food and toy gauntlet twice, at the end was a person in a wheelchair who was holding the full bag of yummy treats and it was her job as part of the testing to lean the bag of treats forward right into the nose of the dog and ask if the dog would like some treats!  While I declined the offer, Sugar overruled me and wanted to let me know that “Yes, I do want some treats and you are not making good decisions for me!” in no uncertain terms! I thought that this was the moment that we would fail, and she would gently excuse us to leave the testing procedure.  To my surprise, Sugar regained her composure at the last available second and went into a sit and avoided the treat. I gave a sideways glance towards the evaluator to learn mine and Sugar’s fate-and it was enough to let us continue.

We went through the rest of the testing and finally, it was time for the evaluator to inform us of our fate-WE PASSED!  A flood of relief came over me and I resisted the urge to tear up.  It was going to happen. Sugar and I would be a Therapy Dog team!!!!

In the near future when we receive her Therapy Dog bandana and kit from the organization, we will be ready and waiting to determine who she will be able to visit and help!  There are so many places that can use the real gift of engaging with a dog that the possibilities are endless!

We had to have a couple of celebrations afterward!  A quick visit to one of her whelping homes to tell them in person of her accomplishment and then off to a human/dog party where she got to play with friends and meet one of her grandaughters (Quince)! 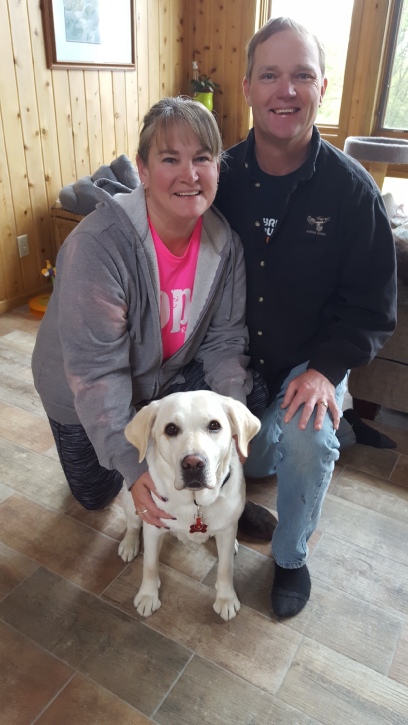 Visiting one of her whelping homes to deliver the good news in person on the way home! 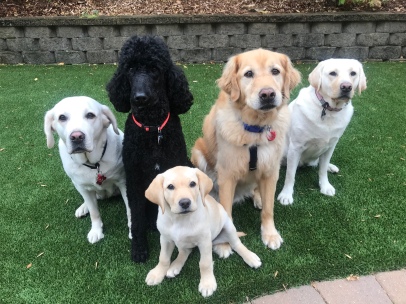 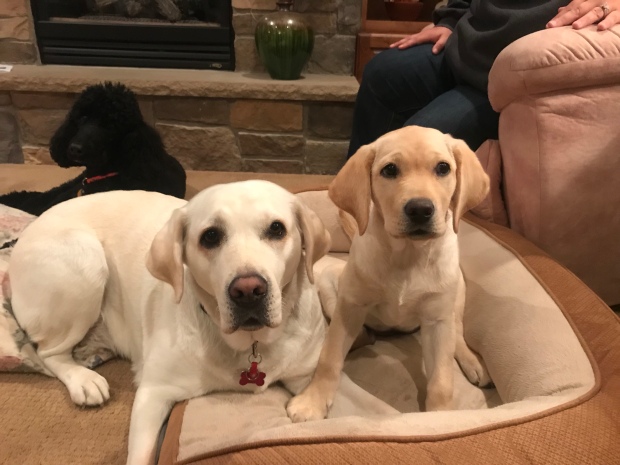 She was meant to be a Therapy Dog, and I can’t wait to see the people she helps along the way!!

How fitting this quote is for her journey!

Return To The Basics

We don’t always need a profound new insight. Often, we just need to be reminded of the basics — the lessons we’ve already learned.

The dogs were obviously exhausted from their playdate! They impressed all of us with their ability to relax in an active environment!

One thought on “Turning the Page-Starting Again”